There are some oddities about a R350m mandate struck between the Eskom Pension and Provident Fund and a private equity joint venture linked to its former CEO and principal officer, S’bu Luthuli, says the writer. (Photo: Adobestock)

A pension fund CEO resigns, and almost exactly a year later, is granted a R350m mandate to invest in the property sector by the fund shortly after a mandated cooling-off period ends. The fund makes no mention of the deal in its financial statements for that year. Is this legitimate or not? And by the way, where are the auditors?

You don’t have to be an accounting expert to find it odd that no mention was made in the Eskom Pension and Provident Fund’s (EPPF) unabridged Annual Financial Statements (AFS) to June 2019 about the R350-million mandate struck between EPPF and a private equity joint-venture linked to its former CEO and Principal Officer, S’bu Luthuli. It is, after all, a big deal with a significant former stakeholder.

Pension schemes vary greatly in their size and complexity, and have become a significant matter of public interest. But the Pension Funds Act of 1958 is too old to be totally relevant in 2020. But old or not, they are still the rules, and they still need to be obeyed. In addition, every individual fund also has its own bespoke rules and, importantly, trustees are mandated by their fiduciary obligations.

It is also the responsibility of the auditor to check that all these compliance boxes are ticked and ensure the accounting practice is up to standard.

PwC, the EPPF’s auditors, signed off SA’s largest private pension funds financial statements on 29 November 2019. Just before that, a deal was effectively concluded that most probably should have been disclosed as a subsequent year-end event under International Accounting Standard (IAS) 10. The EPPF argues this is not the case. PwC did want to engage in any matters relating to one of their clients.

But the rules suggest otherwise.

The only justification for the omission provided by the EPPF is that the paperwork was only finalised in September 2019, after the year-end close, and that is why the transaction will only reflect in the 2020 financial-year reports.

It doesn’t seem like a terribly big deal; so what if the transaction is only acknowledged a year later? But it’s suggestive of a broader trend of events of what was happening behind the scenes.

The fact is the deal should have been considered by the auditor. Furthermore, taking the balances revealed in the AFS into account, they could not have financed this mandate from cash reserves and they would have had to start unwinding other investments to finance the deal come September, way before the year-end. So surely it was a deal before the financial year-end was concluded?

Furthermore, R50-million was already invested with Trinity Private Equity long before, so related party disclosures should have been presented, given this existing relationship with the EPPF and with the former CEO/PO during his tenure. These disclosures really come down to management’s judgement, but they should at least have been considered by the auditors to allow appropriate recourse or possible revelation.

Meanwhile, the proposed arrangement remained in breach of the funds’ conflict of interest policy, until it was amended in between July- September 2019, by reducing the cooling-off period for related party transactions to 18 months, when the transaction “emerged above board”.  The EPPF denies this claim, but Business Maverick has confirmed the change with various parties close to the matter and have a copy of the previous conflict of interest policy.

A pension funds attorney, however, tells Business Maverick that a conflict of interest is determined by the facts, and not the paperwork created by those involved, and it’s why he believes the matter should be subjected to further scrutiny.

It won’t be by the FSCA. Their response to non-disclosure is that the law does not require the investment changes to be disclosed, and should only be divulged if requested by a member.

The Regulator further states that no irregularity was detected in the 2019 statements. SA’s prehistoric Pension Policy only recognises problems on paper.

The Independent Regulatory Board of Auditors (Irba) say they don’t oversee the omission in institutional disclosures, only the conduct of individual auditors. They added that they would only launch an investigation into audit irregularities related to one of their members once the FSCA instructed them to do so.

Mpande Property Fund General is registered with the Companies and Intellectual Property Commission (CIPC) and lists Luthuli as its sole director. The newly established property fund is currently operating under the licenced supervision of Trinitas Private Equity, an authorised financial services provider, registered with the Financial Services Conduct Authority (FSCA).

The respective Mpande and its Trinitas entities involved in the joint venture stated in a written letter via their public relations firm that Trinitas Private Equity (TPE) and its principals only established a business relationship with Luthuli after he left the employ of the EPPF.

“This resulted in the creation of Mpande Property Fund Manager registration (MPFM). TPE is a minority shareholder in this business, which has been established as a majority black-controlled fund manager,” they write, adding that “Luthuli also holds shares in the business.”

According to their very detailed explanation on the structure of the arrangement, this is how the partnership pieces fit together: 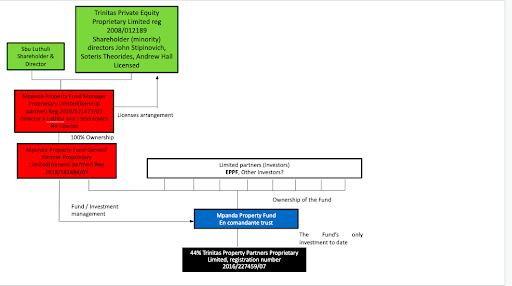 TPE has appointed one member to the board of MPFM, by virtue of its shareholding, namely John Stipinovich, who also serves on the boards of other Trinitas-registered entities. The other named director for MPFM is Luthuli.

The joint response confirms that MPFM currently does not have its own Financial Services Provider licence – as previously reported – but they say MPFM is in the process of applying for one.

But it is worthy to note, however, that the Retail Distribution Review regulations, which are in the pipeline, will disallow such juristic arrangements in future, due to its concerns around conflict of interest. DM/BM

Please note you must be a Maverick Insider to comment. Sign up here or if you are already an Insider.

The State Pension age is set to rise again! Here’s how I’d protect myself By The Motley Fool