Striking university lecturers and students in Bournemouth, UK speak out

Striking university lecturers and students in Bournemouth, UK speak out

Marking the end of the 14-day national strike, lecturers and other staff in Bournemouth mounted picket lines Friday. Some 50,000 lecturers, academic staff and other workers in 74 universities struck to defend pension rights and for better pay, terms and conditions.

Strikers on the picket line at Bournemouth University

A planned combined protest of university workers and young Fridays for Future climate change protestors, scheduled to be held yesterday in London, was cancelled due to fears of the spread of the coronavirus.

The national strike, spread over the last four weeks, went ahead with the University and College Union (UCU) preparing a sell-out. UCU General Secretary Jo Grady has already indicated the skulduggery going on behind the back of her members. She said March 5, “We have made it crystal clear to employers that we are not inflexible… we have extended an olive branch to employers by offering to compromise on some of the demands which we started our industrial action with.”

Despite the readiness to betray the demands of UCU members, university workers want to defend their pensions rights, improve their pay, terms and conditions and have shown repeatedly their desire for a struggle to defend education from marketisation.

Austin Fisher told the WSWS, “I am a principal academic in media production at Bournemouth University, and I have been there for five years. I have come out on strike because I have lots of colleagues who cannot afford to do so. We have people on precarious contracts, zero-hour contracts–many colleagues who have, frankly, not been paid enough over the last few years.

“Pay rises haven’t kept up with inflation. I am in quite a privileged position as a senior academic, so I think it is my duty to be here on their behalf to stand up for their rights.

“I think that the whole future of higher education is in peril. Every lecturer needs to be thinking about those issues. They need to try and act against the degradation of working conditions, and in pay, and in pensions, because ultimately this is going to kill the higher education system. 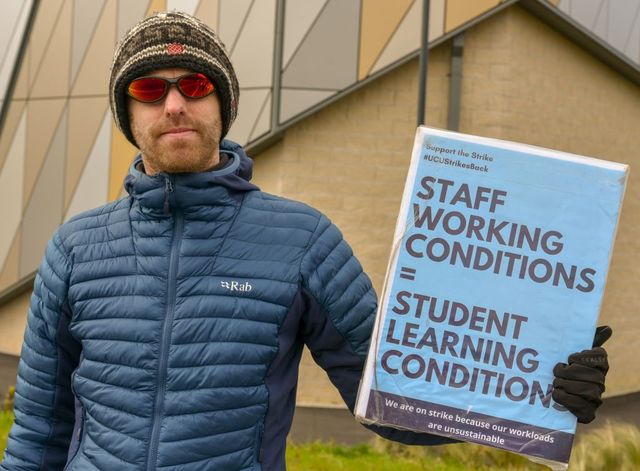 “Broadly, students are on our side. They can see what’s happening. They are the ones who are having to pay for it. Because the lecturers aren’t getting paid what they deserve to be paid. All the money is going into new buildings and managerial jobs, so something has got to give.

“We’ve got to the point that we just can’t continue. The negotiations are ongoing. I have spoken to people that have been in the room with the unions for the negotiations and there has been some development, but we don’t know how much as they can’t disclose to us. We are hoping that the employers can meet us halfway and at least admit that there is a problem—like the gender pay gap and the ethnic pay gap, the casualisation of contracts. University staff wages have been stagnant for over 10 years.

“They have been saying that they can’t afford to give us the wage increase, but you can see what’s behind me—a £20 million-pound building that has just been opened last month. They can afford to build that and they can afford to pay the vice-chancellor a huge salary and the management huge salaries. It is in the hundreds of thousands, but no other academics earn that.

“I think that universities reflect the society that they exist in and always have done. In the post-war era the social democratic consensus of welfare was reflected in the university system, with grants from the government. Now we have entered the neo-liberal phase. The problem is governments since Margaret Thatcher. It is a bigger fight than just universities, but we can try and do our bit.”

“I work here two days a week, on a contract. I used to be on a casual contract, paid hourly. On those sorts of contracts, you end up doing two or three times more work than you’re paid for. I used to come in to do four hours work and sometimes end up spending one or two days working.

“You don’t get paid for preparation so you are doing lots of extra work, plus administration. I’m now on a two-day contract but end up working sometimes three or four days a week. More work seems to be put your way and it doesn’t seem like any other resources are added in terms of extra people.

“This year an extra project suddenly appeared at the beginning of term, which the same handful of people were supposed to do on top of work they already had scheduled. Without us, the universities aren’t anything. We are being exploited because we care about students.” 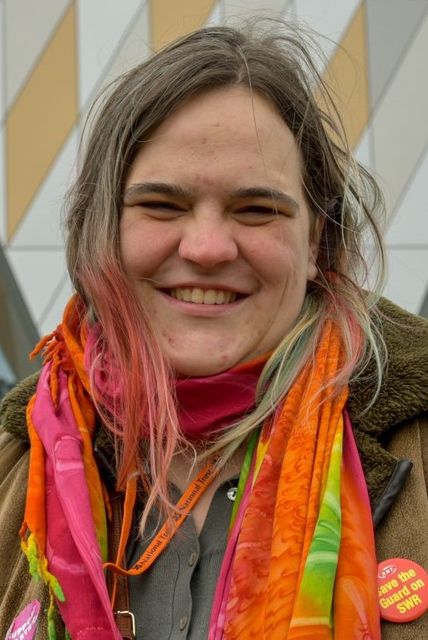 Sadie explained, “I am studying for a master’s in political psychology. I feel like this is a struggle that impacts on all of us. I would like to stay and do a PhD, so I am looking at the same conditions that lecturers are dealing with now. It impacts on whether I’ll be able to stick around and it’s also a solidarity thing. They deserve to be treated better than they are. Their workloads are too high, their pay is too low, they’re stressed, they’re exhausted, and we are not getting the best education when they are not able to deliver fully. That’s not what we are coming to university for.

“During the first week of the strike, we walked up to the vice-chancellor’s office and requested a meeting with him. There were about 15 of us, so that was halfway between a meeting request and direct action. That’s the kind of thing that we need to do more of. Being out here I’ve realised that the support of the students really means the world to the striking staff. When I first came to the picket line, I expected to pop by for five minutes, tell them I supported them, tell them that I wasn’t going to go to class and then go home. But they all wanted to talk to me, it made such a big impact that I’ve ended up standing with them on the picket line almost every single day.

“I’ve got to know them really well. They are just an amazing, brilliant bunch of people. I don’t think that the university realises how lucky it is to have a faculty like this.

“The past couple of days we did a festival in town, part of teach out. It’s called the Decomodify Education Festival. The third day was supposed to be today, but it was cancelled because of coronavirus. The first day I did a talk about why we are calling for decommodification—an end to the market model. It’s the idea that as a student, I pay money and in exchange I receive a service and that service is that I get a piece of paper with a degree on it. It’s not really about the education at all anymore, it’s about the marketability and what job you can get.

“I think that is a crying shame, because there is so much that we need to learn and discover. Nothing is sacred in this society anymore. It’s all about what you can do with money. It comes down to how can we put down a strong line in the sand to say, ‘This is what we’re fighting for and we won’t accept anything less.’ If and when the senior union leaders like Jo Grady are seen to undermine that then that’s a big problem. Because there’s a lot of people making huge sacrifices out here and I’ve seen people breaking into tears. It’s been rough.”

Contribute to the fight for socialism in 2020

2019 has been a year of mass social upheaval. We need you to help the WSWS and ICFI make 2020 the year of international socialist revival. We must expand our work and our influence in the international working class. If you agree, donate today. Thank you.

How I invested in my 20s and 30s, and what I’d do differently today