In an extraordinary gazette issued on June 2, Sri Lankan President Gotabhaya Rajapakse announced the establishment of a military-led taskforce with far-reaching powers and answerable only to him.

The 13-member taskforce is chaired by the defence ministry secretary, retired Major General Kamal Gunaratne, and features the commanders of the Army, Navy and Air Force—Lieutenant General Shavendra Silva, Vice Admiral Piyal de Silva and Air Marshal Sumangala Dias, respectively. Others members include the intelligence chiefs from the three armed forces, and retired senior military officers recently appointed by Rajapakse to key government institutions, as well as the Acting Inspector General of Police and two other senior police officers.

The Socialist Equality Party (SEP) warns that the taskforce is a major step toward a presidential dictatorship, based on the military, in preparation to take on the working class, amid the deepening economic and political crisis and social tensions intensified by the COVID-19 pandemic. 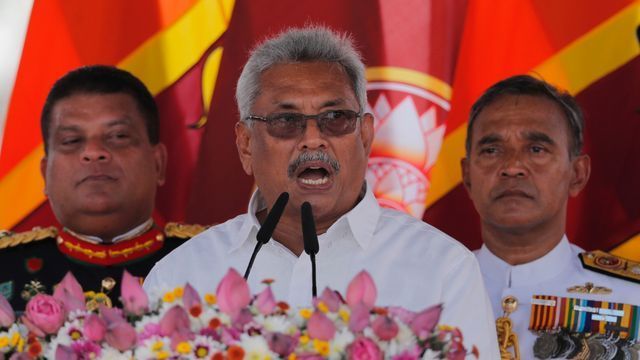 Rajapakse has declared that the government’s principal responsibility is to “give priority to national security and create a virtuous, disciplined and lawful society which respects the rule of law and justice.” The newly-established body is tasked with imposing this sinister, reactionary agenda.

To achieve these objectives, Rajapakse declared, the taskforce will take “immediate steps to curb the illegal activities of social groups that are violating the law and emerging as harmful to the free and peaceful existence of society.” It will also initiate “legal action against persons responsible for illegal and antisocial activities conducted in Sri Lanka, whilst located in other countries.”

The taskforce will be directed against the working class, now coming into struggles in defence of its rights, and against political opponents, including the SEP. The government will brand their activities as “illegal, anti-social and harmful for peaceful coexistence of society.”

The taskforce, the president claims, will take “measures for prevention against the drug menace” and to “investigate and prevent any illegal and anti-social activities in and around the prisons.”

The bourgeois media has uncritically promoted Rajapakse’s posturing about drugs and illegal activities. This is a cover up. The taskforce has nothing to do with fighting drugs and other criminal activities but is a military cabal with authoritarian powers.

The military-led taskforce can “issue instructions or requests” to government officers from any ministry, department, corporation or similar institution, for “assistance in the provision of services.”

These state officers will be duty bound to act on the taskforce’s demands, with all cases of delay or default reported to the president and regarded as disobedience, with possible penalties.

In Sri Lanka, state officers are considered part of the civil administration. Now, they can be brought under the control of the military taskforce, which has the power to circumvent cabinet ministers and the parliament.

These measures violate the constitution and, in particular, the 19th amendment introduced by the previous Sirisena-Wickremesinghe administration, which curtailed certain powers of the executive presidency.

Although the Sirisena-Wickremesinghe government backed away from its promise to abolish the executive presidency, its 19th amendment established that the president has to act with the advice of the prime minister and the cabinet, cannot hold a ministerial position, and is responsible to the parliament.

Rajapakse addressed the military and government officers on the day his gazette was announced and later issued a tweet that declared: “I will not hesitate to exercise the power vested in me by the people to make decisions that are needed for a better country.” The president’s claims are in clear violation of constitution.

Rajapakse’s rapid move toward a dictatorship parallels the actions of the ruling classes in every country in response to the deepening economic and political crisis.

In the US, the centre of world imperialism, President Donald Trump is encouraging fascistic forces and mobilising the military in response to the mass demonstrations that have erupted against police violence and the police murder of George Floyd.

As the statement issued by our sister party, the SEP in the US—“A call to the working class! Stop Trump’s coup d’état ”—explains:

The target of the conspiracy in the White House is the working class. The corporate-financial oligarchy is terrified that the eruption of mass demonstrations against police violence will intersect with the immense social anger among workers over social inequality, which has been enormously intensified as a result of the ruling class response to the coronavirus pandemic and the homicidal back-to-work campaign.

The Sri Lankan economy is in a shambles. Tourism, exports and migrant workers’ remittances have dried up, international investments on the country’s sovereign bonds are being withdrawn and economic growth is predicted to decline this year to 1 percent or less. Falling international reserves have created the prospect of a foreign debt default.

While the Rajapakse government plans to impose the burden of this crisis onto the backs of the masses, working-class anger is mounting against the destruction of hundreds of thousands of jobs, and employer assaults on wages and pension rights. Workers in the garment industries and in the health and Samurdhi welfare sectors have already demonstrated and taken industrial action against these attacks.

Rajapakse became president last November, following the rising wave of workers’ strikes and protests that shattered the Sirisena-Wickremesinghe regime. Rajapakse has promised big business “strong and stable” rule, but he and his Sri Lanka Podujana Peramuna (SLPP)-led minority government are well aware that they are sitting on a political tinderbox.

Rajapakse’s reaction to the coronavirus pandemic has been to further undermine democratic rights and expand military power. He appointed Army chief, Lieutenant General Shavendra Silva, head of the National Operation Centre for Prevention of COVID-19 and mobilised the military and its intelligence apparatus in large numbers in Colombo. Military generals have been placed in charge of the ports authority, customs and the health ministry, and made governors of several provinces. The government is also deliberately stirring up anti-Tamil and anti-Muslim communal tensions to divide and derail growing social opposition.

Not a single opposition party has opposed Rajapakse’s military-led taskforce and its dictatorial agenda. Over the past three months, the United National Party (UNP), Samagi Jana Balavegaya (SJB), Janatha Vimukthi Peramuna, Tamil National Alliance (TNA) and Muslim parties have participated in two all-party meetings with Prime Minister Mahinda Rajapakse and pledged their support to the administration’s so-called fight against the pandemic.

Last month, the UNP, SJB, TNA and Muslim parties also signed a letter urging Rajapakse to reconvene the parliament, which was dissolved because of the pending national elections. They pledged not to bring down the government and to pass any legislation required by the government. None of Sri Lanka’s opposition parties defends the democratic rights of workers and the poor.

Whether in or out of government, these pro-imperialist parties have imposed International Monetary Fund-dictated austerity measures, attacked the rights of all working people, and mobilised the military and police to suppress any resistance.

Every political faction of the ruling elite has a blood-soaked history, having backed the 30-year bloody communalist war against the separatist Liberation Tigers of Tamil Eelam in the North and East, and numerous other crimes.

The ruling elites are united in their fear of the growing unrest among workers and poor and all depend on the military to maintain capitalist rule.

The working class can defeat the growing threat of dictatorship only by mobilising its independent revolutionary strength across all ethnic and religious divides, and uniting with the international working class now coming to struggle in every country.

This requires the building of action committees in workplaces and neighbourhoods to rally the working class, young people and the rural poor to defend their jobs and basic rights. This struggle can advance only in the fight for a workers’ and peasants’ government, which seizes capitalist property and rationally reorganises society on a socialist and internationalist basis.

This is the program of the SEP, the Sri Lankan section of the International Committee of the Fourth International. We urge our readers to join and build this party.

What is the impact of temporary unemployment on the accrual of pension rights and on death coverage?

Merger of Dutch transport schemes to run as scheduled | News