The amount of money spent on social security benefits in the first quarter of the year rose by €13.2 million from last year – and the increase is not down to newly-introduced benefits in response to the coronavirus outbreak.

Some €243 million was spent between January and March, reflecting a 5.8 per cent rise from the first quarter of 2019, according to figures from the National Statistics Office.

Most of the increase was in contributory benefits, which are tied to Social Security Contributions, and include benefits like sickness, unemployment, pension and maternity.

The NSO noted that the rise was not in relation to the newly-introduced COVID-19 benefits, as these payments started in April.

Instead the main catalyst for the increased outlay was the higher number of ‘two-thirds’ pensioners. A €9.2 million rise was reported under pensions in respect of retirement.

A two-thirds pension pays a pension equivalent to two thirds of
a person’s salary, up to a maximum amount.

Further increases were registered in contributory bonus, widowhood pensions (both €1.6 million) and other benefits (€0.1 million).

A €0.3 million drop in invalidity pensions marginally offset the rise. 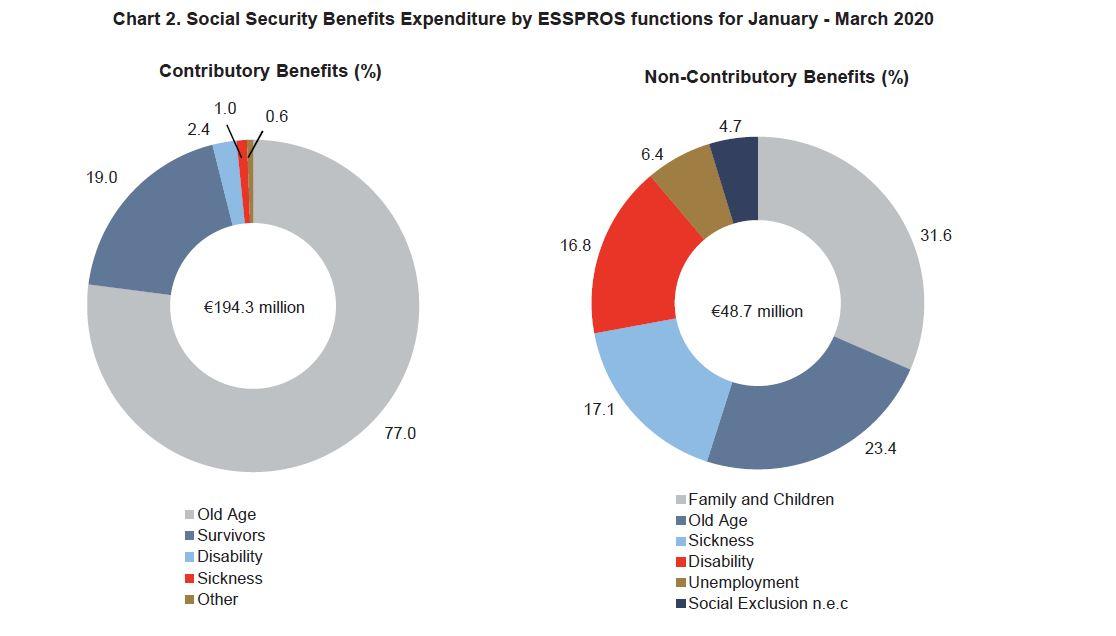 In contrast, spending on total social assistance and child allowance fell by €1.1 million and €0.1 million respectively.

Between January and March, the largest number of contributory beneficiaries was found under the two-thirds pension (50,233). Furthermore, the same benefit also reported the biggest rise (2,019).

The biggest drop in beneficiaries was recorded under the retirement pension, amounting to 709 less than in the first quarter of 2019.

The largest share of non-contributory recipients was registered under children’s allowance (40,320), followed by supplementary allowance with 22,558 beneficiaries.

These two benefits reported the biggest positive and negative changes in recipients from 2019, with 1,246 more people obtaining children’s allowance and supplementary allowance beneficiaries dropping by 518.

Independent journalism costs money. Support Times of Malta for the price of a coffee.

How we work out child maintenance