Rallies were held in several university towns and cities around the UK Wednesday. University staff are striking in defence of pension rights and for better pay, terms and conditions.

Further protests are being held Friday to mark the end of the 14-day strike including in London. These will include joint rallies with the regular Friday for Future climate change protests of schoolchildren and students.

The strike involves up to 50,000 university staff and impacts over a million students. The protests were held at some of the largest university campuses in the UK. 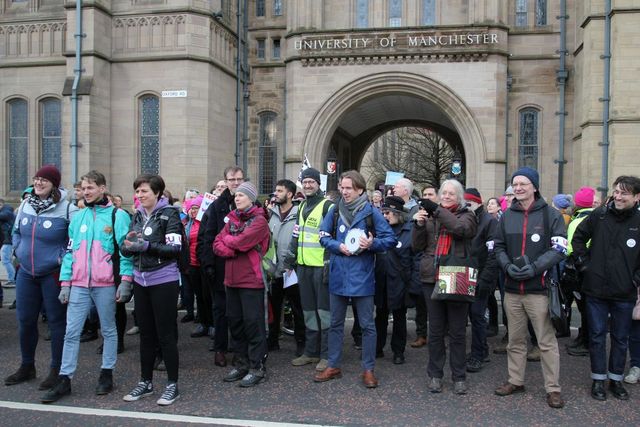 In Manchester, around 200 staff and students rallied at University Place in the heart of the main campus. A march took place around the campus, ending in the University’s main quadrangle. During the event, staff and students stopped in the middle of the main Oxford Road thoroughfare that runs through the entire campus, temporarily stopping traffic.

The rally including several local UCU officials claiming that they had received much “solidarity” from other unions, with two officials speaking from the Fire Brigades Union and Unison, supposedly proof of this. The Unison official spoke only to say his union would be donating £2,000 to the strikers. Speakers sought to maintain illusion that the UCU would oversee a victory, despite the statements of union leader Jo Grady last week that the UCU were not “inflexible” and its negotiators were willing to “make significant concessions on the other elements of the dispute, relating to pay.” 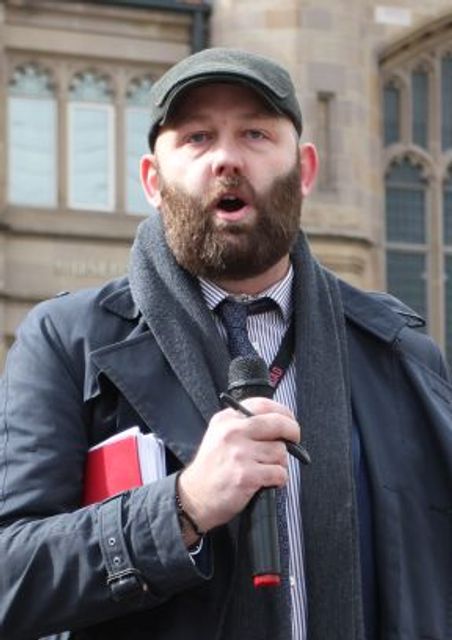 Some speakers criticised Labour Party Mayor of Greater Manchester Andy Burnham for not attending the rally after he had promised to. His place was taken instead by the Mayor of Salford Paul Dennett, who was careful not to utter a word about Burnham’s absence. A supporter of Labour leader Jeremy Corbyn, Dennett has overseen millions of pounds in austerity cuts Salford.

Over the last days, a group of students have been occupying Manchester university buildings in support of the strike. Frazz, a history student at the university spoke to the rally, saying that the occupation was in solidarity with striking workers.

She told a WSWS reporter, “A lot of us are part of the People and Planet Society, and we had an occupation in November against the investment in fossil fuels at the university. On our last day was the first day of the last round of strikes [by university workers] and the UCU members marched past the building offering a lot of solidarity. A lot of us wanted to repay that by offering solidarity to their strike and try to lift their moral.” 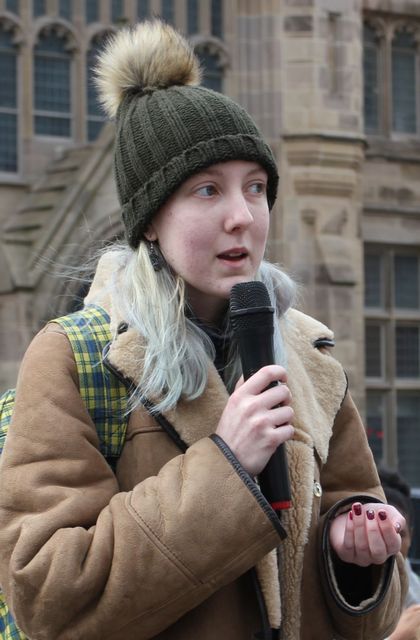 “Being inside the university makes you more aware of how much inequality there is. We have security guards watching us all of the time for safety reasons. We have had conversations with them and they’re in dispute about their pensions. They say although they cannot do anything whilst working, they say that they are in support of us. One of the people watching us yesterday was a member of Unison and said that he would also strike. We said, ‘Well if you do, we’ll be here.’”

Of the small turnout among a university with over 40,000 students and 10,000 staff, Frazz pointed to the pressure being put on international students—who make up a large proportion of all students—to attend lectures. “A lot of international students can’t strike and get monitored to see if they attend seminars. So, if they don’t turn up, it goes on a record and gets reported, and they can have their students visa revoked. This pressures them to have to cross picket lines and things, even though they might not want to. It’s a big issue at some other universities. At one, they make international students download an app that allows them to track where they are, and if they attend lectures and seminars. It’s so appalling. I was horrified.” 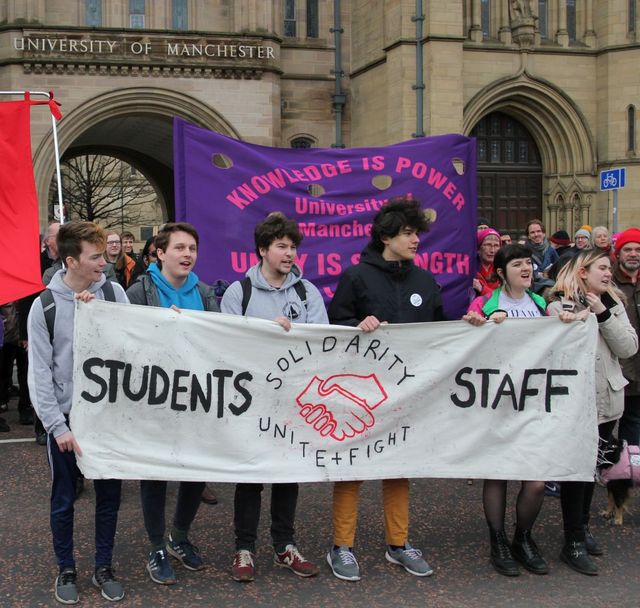 Francesco, a Chilean tutor at Manchester University, said of the cuts being demanded by the university, “The result of this is that people will be impoverished. Staff will have to work extra loads to have even fair pay at the end of the month. It will also reduce the quality of life of students so we need to fight these changes.”

He spoke about the “free market” policies imposed after the military coup in Chile in 1973. “It’s not only about [General] Pinochet [who seized power in the coup]. It’s about the 30 year that came after him. The so-called centre-left parties that ruled after him did nothing to stop his policies or overturn them. We don’t need any more ‘moderation’ between the centre-left and right. We have to fight for workers’ rights.”

Tanya is a Chilean studying psychology at Manchester University. She said, “The struggle against marketisation had been a struggle of the students and people of Chile for decades. In Chile we have the highest rate of people who commit suicide, the highest rate of retirees who do. That is why we need to fight for our pensions.”

Cristen, a social work student said, “This is all about fighting capitalist neo-liberal reforms. We know about the negative consequences this brings everywhere. It is important to support every dispute against these policies. The staff are fighting against privatising their pensions, their precarious contracts and work. These are the conditions facing working class people all over the world.”

Asked her thoughts on UCU leader Grady’s comments about the eagerness of the union leadership to make concessions, Tanya said this could be seen everywhere: “There was a saying in Chile in the 1990s along these lines which was “We’ll bring change but only what is possible right now.’ We’ve seen lots of compromising.”

Lucy, a chemistry student said, “The staff to student ration is very small. Staff don’t seem to be as available as they should be, but I can see why when they are expected to do so much already.

“It doesn’t inspire me to want to get into teaching if conditions are like they are here. It seems stressful and miserable. It’s important for students to understand what its like for their teachers.”

On the Conservative government’s agenda for higher education to be once again the preserve of a privileged minority, Lucy said, “They are just maintaining the class system even further and keeping the people at the bottom on the bottom, so that they cant access education and get the jobs.”

In Sheffield, around 100 attended a rally outside City Hall. UCU officials mainly engaged in self-congratulation and anti-Tory demagogy.

Sam Marsh, UCU national negotiator for the pension scheme and Sheffield UCU branch president claimed that his team had “won all the arguments” in discussions with the employers organisations. “The only thing stopping us from resolving this dispute is the discipline and hard line from the employers—they’ve lost the argument so that’s all they’ve got left to hide behind. That’s why it’s important that we continue the pressure in the way we did today, taking our message directly [via a petition] to our Vice-Chancellor’s door. That’s what’s going to break open this dispute and change things here.”

He urged UCU members to return to work in an orderly fashion next Monday and continue action short of strike to maintain pressure.

He said of the Tory government, “They’re already threatening more anti-union laws. The proposal is on the table to bring in minimum service agreements, initially for transport workers but we know it’s going to extend to everybody else. It’s unacceptable to deny our proper civil right to strike, which we need to defend.”

He again declined to mention that last week UCU General Secretary Grady wrote to congratulate Conservative universities minister Michelle Donelan for her recent appointment while pleading that she “put pressure on the employers representatives” to “engage with discussions to resolve the dispute.”

University staff and students at the Sheffeild protest

Anne, a geography lecturer told the WSWS, “We are being forced to defend our conditions in the face of institutions that are awash with cash using every excuse to justify making cuts. I’ve worked here for 25 years. We’ve seen a steady undermining of the situation over this time.

“The issues go far beyond just this university. I’m very concerned about the way that education is being run as a business and students are being transformed into customers. They give us less resources to work with, so we take up the slack. The same thing is happening in the NHS and everywhere else in society.”

She warned, “We were hopeful that through discussions the dispute might be resolved in our interests, but it looks like it [another strike] might be happening again.”

Contribute to the fight for socialism in 2020

2019 has been a year of mass social upheaval. We need you to help the WSWS and ICFI make 2020 the year of international socialist revival. We must expand our work and our influence in the international working class. If you agree, donate today. Thank you.

‘It was a case of heat or eat’: Seven women explain why they want pension age dropped to 60