The average UK scheme experienced a 6.9% fall in funding level bewteen the end of December 2019 to the end of March 2020, according to JP Morgan Asset Management (JPMAM).

The manager said that “it’s potentially going to take up to three years to recover the serious dent to funding levels incurred over the past three months”. It would require a surplus return – assets in excess of liabilities – of 2.4% per annum for the next three years, it added.

“The good news, however, is that we estimate a 58% chance of achieving this based on current allocations,” said Sorca Kelly-Scholte, EMEA head of pension solutions and advisory at JPMAM.

“That said, as we know, not all pension funds are equal,” she added.

Kelly-Scholte has identified four types of pension fund and mapped out the kinds of levers they can potentially pull in today’s environment, faced with choppy returns and renewed funded status challenges. 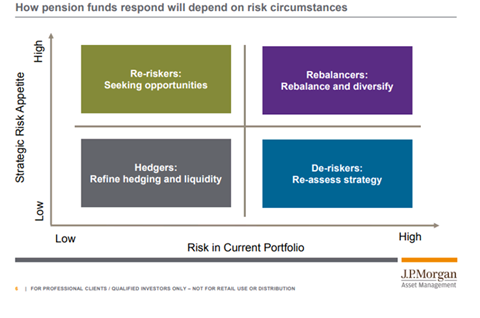 Hedgers – which potentially experience liquidity, income impairment and contribution impairment, if their employer is distressed – tend to review their liquidity, collateral and cashflow management, while refocusing on core real assets and raise the quality in credit exposures.

Re-riskers – which potentially experience the same as hedgers but are less likely to have a distressed employer – tend to take advantage of credit opportunities, diversify their real asset exposure and re-risk into sustainable or growth equity strategies, in addition to reviewing their liquidity, collateral and cashflow management.

Re-balancers – which can potentially experience heavy drawdowns and could be forced to sell assets if in a negative cashflow – tend to diversify into higher-returning credit and real asset strategies, and also revisit currency hedging.

De-riskers – which can experience similar risk circumstances as re-balancers but are more likely to have a distressed employer – focus on diversifying as a means of derisking and go for liability-aware credit instead of liaility-driven investment. 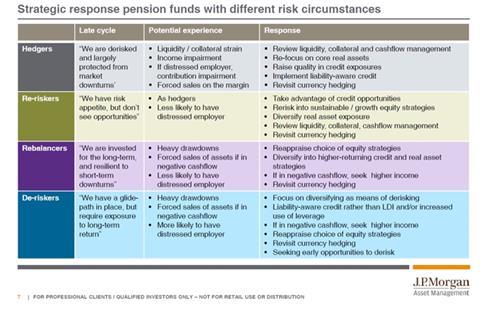 The index – which shows the latest estimated funding position, on a section 179 (s179) basis, for the defined benefit pension schemes potentially eligible for entry to the PPF – also revealed that the funding ratio of the idex schemes decreased from 93.1% at the end of April 2020 to 90.9%.

The PPF also said that total assets stood at £1.8trn, while liabilities were recorded at £1.9trn. There were 3,621 schemes in deficit and 1,801 schemes in surplus.

Lisa McCrory, PPF chief finance officer and chief actuary, said: “This month the funding ratio as measured by the PPF 7800 Index has gone down despite improvements in equity markets as the expectation of future inflation has increased the liabilities of schemes.”

She added that although many schemes do have some exposure to inflation linked assets, “the falling index linked gilt yields have increased scheme liabilities by more than the assets.”

On the PPF 7800 Index’s latest figures, Sion Cole, head of UK fiduciary business at BlackRock, said: “The month was marked by lower volatility in equity markets, implying that investors are cautiously monitoring the situation.” 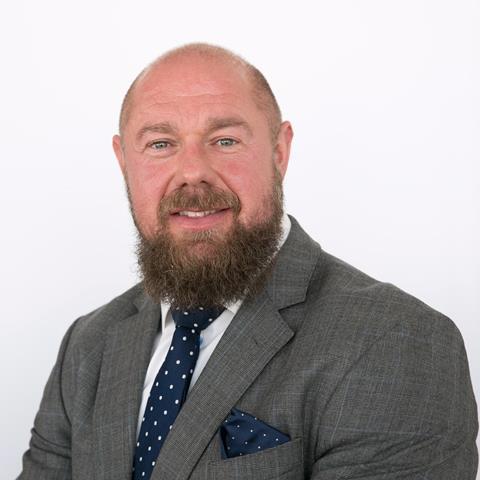 He added that a decline in infection rates in many countries were also a reason for optimism. “Confidence that we have hit the peak number of cases and a flattening of the new case curve serve as key catalysts for driving a market recovery, alongside a significant policy response globally and liquidity in the financial markets.”

Cole said, however, that despite this positive market sentiment, pension schemes are still some way off where they ended 2019.

“This will no doubt have sparked conversations on whether changes need to be made to journey plans and how trustees and sponsors can ensure their schemes’ investment strategies are appropriate,” he added.

He said BlackRock has seen an increase in the number of pension funds considering fiduciary management as a new approach, “to quickly take advantage of market dislocations, improve risk management and reduce trustees’ governance burden in this rapidly evolving landscape”.

The average funding levels of Dutch pension funds have slightly increased in May, largely thanks to improving equity markets and rising interest rates, according to consultancies Aon and Mercer.

The duo said that coverage ratios had risen by up to 2% to 92% on average. However, schemes’ “policy funding” – their average coverage over the past 12 months, and the main criterion for rights cuts – had decreased to 98% on average, below the temporary required minimum of 100%, according to the firms.

Based on the current rules, and without improvement before year-end, this will require a reduction of pension rights and benefits next year.

Emerging market equities, however, lost 1% due to tensions between the US and China, Aon stated, adding that real estate fell almost 3%.

According to the consultancy, high yield had gained 5%, following narrowing spreads in the wake of improving investor sentiment.

Mercer added that commodities had generated 2.7%, while euro-denominated government bonds and ditto for credit had returned 0.2% and 0.3%, respectively.